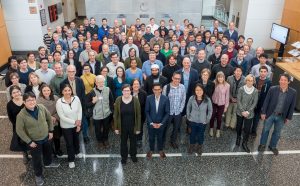 The CMB S4 Collaboration at its recent workshop held at Argonne National Laboratory.

CMB-S4 is a proposed next generation cosmic microwave background (CMB) experiment that will be the “ultimate” ground-based CMB experiment.  Telescopes operating from both the Atacama Desert in Chile as well as the South Pole will be used to survey ~40% of the sky to unprecedented depths at 40-270 GHz. The data from CMB-S4 will enable stringent constraints of cosmological models governing inflation, the number and total mass of neutrinos, light relics, and the evolution of cosmic structure. A number of Argonne group members are active members of this new scientific collaboration; we are particularly interested in the constraints on inflation, dark energy, and neutrinos to come from CMB-S4. Next-generation hydrodynamic simulations with HACC are being targeted for forecasts and systematics evaluation for CMB-S4.