Clusters of galaxies, the largest gravitationally-collapsed systems in the Universe, have long been recognized as valuable objects with which to study cosmology. These rare, massive objects ( 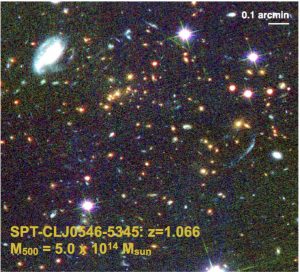 with masses ranging from 10^14 – 10^15 M⊙), reside at the extreme peaks in the matter density field, and their abundance is exponentially sensitive to phenomena that govern the growth of structure in the Universe. Clusters can be used as powerful probes into the source of the accelerated cosmic expansion (is the unexplained acceleration caused by a new form of energy, so-called “Dark Energy?” or does it simply reflect an incomplete understanding of Gravity?) as well as the constituents of the Universe including e.g., the matter density, the effective number of relativistic species, and the sum of the neutrino masses.
At Argonne we are particularly interested in studying clusters detected via the thermal Sunyaev–Zel’dovich effect—especially those identified by the South Pole telescope and, in the future, by the CMB-S4 experiment—and in optical cluster surveys such as the Dark Energy Survey and LSST. Cosmological inference from galaxy clusters is currently limited by uncertainty in the calibration of cluster observables to mass; by both characterizing these systems across the electronic magnetic spectrum, as well as using state-of-the-art cosmological simulations to design new robust analysis techniques, we aim to reduce this uncertainty to enable clusters to truly be “the most powerful cosmological probe”.